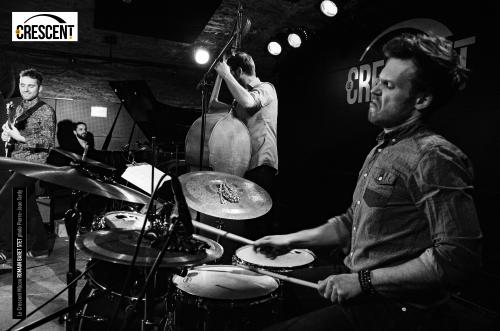 He has worked with André Ceccarelli, André Charlier, Pierre Drevet, Eric Prost, Florent Briquet, Loïs Le Van, Gaby Vegh, Franck Agulhon, Boris Blanchet, Karim Maurice and Neeskens... His career begins with the pop-rock band LES AUTRES with which he released the disc INSTANT T in 2006 and made his firsts great stages : Transborder, Brise Glace, Summum... and 1st parts; DIAM's, VEGASTAR ...).
He created the Séb Necca Quartet with which he recorded in 2011 a record of contemporary jazz compositions with Pierre Drevet as a guest on the trumpet. Look Inside (Musea Record) followed by some thirty concerts. In 2012 he joined The Inglourious Fonkers: 60 concerts a year and created the character ANDY. At the same time, the group of jazz-world compositions AZZANGO is born, and has a great success in Spain and the album Mediterraneo (Harmonia Mundi - 2013) is published on the madrilene record label Nuevos Medios at the end of 2014, followed by 4 tours throughout Spain In 2015.
In 2014, he recorded with the Roman Baret Trio Split Moments. LIAM contacts him to record the magnificent disc with the colors folk and pop Hear the Silence in March 2015.